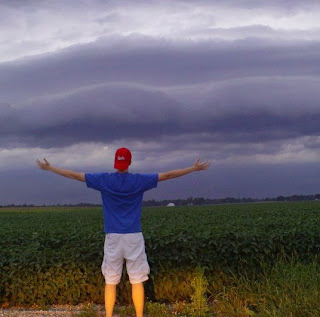 1)What is your name and where do you live?
My name is James Gustina and I live in Cincinnati, Ohio.
2) Do you have a website or a brand name that people identify you as?


Well I’m currently taking part in two sites. I put some items on www.toledotornadotrackers.webs.com from time to time as well as tornadohandoff.com which is a site Nathan Curtis-Wagoner and myself are working on to have a venue to showcase our photos in an easy way.
3) What got you interested in weather?
I honestly can’t place it. Tornadoes never really interested me as a child except for one and other than that I was usually scared for my life every time there was a severe thunderstorm. I’d guess I place it on the April 9 1999 Blue Ash F4 that hit nearby. That tornado scared the mess out of me but also piqued my interest a bit.


4) What is your favorite aspect of weather?
Severe thunderstorms are by far my favorite aspect. I love forecasting for chase days and all the different cloud types and dynamics associated with severe storms.


6) What do you see chasing as... a hobby or a business?
Hobby and nothing more


7) Who do you credit for getting you into chasing and what have they done to further your career?
I can’t really place my finger on who or what got me started but I’d have to say a blend of the first season of the Discovery show Storm Chasers and myself after a project on tornadoes in eighth grade.


8) Do you have any chase partners?
I sometimes chase with Brandon Copic and Ryan Beach but my parents were my first faithful chase partners for the early years. I can’t give them enough credit for having the willpower to continually go out with me to drive around the middle of nowhere in search of storms.


9) What was your most successful chase?
That title is split between May 25, 2011 and May 30, 2009. May 25th gave me one of the two Ohio supercells I have ever chased and it truly was an amazing storm. Only regret was missing a tornado it put down south of Dayton. May 30th gave me the other Ohio supercell and it being the first chase I have photographs from I consider it one of my best.


10) What was your most terrifying moment?
Getting cored by the same supercell on May 25th, 2011. The storm had been undergoing a merge with a smaller cell to its south and what had been a clear updraft base turned messy and clogged up with rain still with a strong couplet somewhere in that mix. Thankfully we missed the worst of it after the mesocyclone passed further north of us.


11) About how many tornadoes have you seen?
It pains me to say it but so far zero.


12) What do you think about people who chase for sales and the need to get up close and personal with Mother Nature?
Honestly, if chasing for profit is someone’s thing, I don’t really care. If the need for that profit means getting up close and personal then so be it, I just hope those same individuals stress the difficulty and skill required to be that close to something as dangerous as a tornado.


13) Describe your dream chase.
A classic dryline setup in western Kansas. High instability with moderate shear along with a moderately strong cap to cook things over for maximum punch. First supercell that rolls off the dryline is a classic high plains supercell with a barber pole updraft and a beefy updraft base. Maybe a tornado or two but those aren’t necessary, just a nicely structured supercell.


14) What is your favorite set up to chase?
Warm front setups in the Midwest. They’re challenging to forecast for and the reward at the end is that much better.


17) What do you see chasing as being like in 5-10 years?
A lot less crowded. A lot of new chasers including myself have come up in the past several years but droves of people are probably beginning to move on now that “the fad has died” so to speak with Storm Chasers going off air and the visibility of the hobby going down a little, even with all the big outbreaks we had this past season. A bit more high tech as mobile broadband tech gets improved as well as cameras but essentially the same.


18) Despite all the deaths and destruction in 2011, are you looking forward to chasing in 2012 knowing you can run into a Tuscaloosa or Joplin?
I definitely am looking forward to chase season 2012. What happened in Tuscaloosa and  Joplin were some of the worst tornadic events possible and even though every season has the potential to put out one of those monsters that goes tearing through a town or a city that will never stop me from chasing, I just hope I’m able to help out in some way when another event like that comes along.


19) Is there any point in time where you had no desire to chase anymore? What caused that and what gave you the power to move on.
So far I’ve been blessed to have missed most of the more gruesome aspects that come along with chasing and so I’ve never felt the need to stop chasing as a result of something I’ve seen.


20) How long do you plan on continuing chasing?
I may as well spring for the cheesy here: to infinity and beyond.


21) Outside of chasing, what do you like to do?
I play a lot of soccer with the time that isn’t spent with chasing or school. I’m also into Great Plains history (no surprises there) as well as travelling as much as I can.


22) What kind of music do you like to listen to on the chase or in general?
It varies. A lot of times I don’t even have the radio on or a CD in when I’m chasing, but I’d have to say alternative rock is the most played genre in the car.


23) What is your favorite professional and college sports team?
My favorite teams are of course the Cincinnati Reds and the Bengals but also Newcastle United Football Club (English Premier League).


24) Do you have a family or pets?
Sure do, have a lemon-colored Beagle named Finch.


25) Tell me 3 things that someone outside of chasing may not know you for.
-My favorite food is good ole cheeseburger with ketchup, pickles and grilled onions with steak fries on the side with a cherry coke.
-I’m not as shy as most people think, I could talk for hours if given the chance haha
-I’ve been out of the country three times to visit Andros Island in the Bahamas and Madrid, Toledo, and Barcelona in Spain, both times with my school and finally Victoria, British Columbia on a family trip.


26) If you have kids or plan on having them... would you like to involve them in your chasing?
If I do end up having kids, if they decide they want to try out chasing with me and my significant other won’t have an aneurysm imagining her kids out with their crazy dad chasing after tornadoes then I’d totally love to involve them.


27) Do you have a job and what do you do?
I don’t have a job yet but I’m trying to get in at a soccer shop to help fund my season.

28) How do you feel about people who say they chase tornadoes for the sole purpose of saving lives?
I could go on and on about this and I’m sure I’ve ranted about this more than twice but I have only two words to describe people who delude themselves into that frame of mind: Cockamamie BS.


29) If there was one event in history that you wish you were around for to chase, what would it be?
Definitely, I wish I had been around for the April 1974 Super Outbreak. I’ve always been a bit fascinated by the Xenia and Sayler Park F5s and chasing that would have been the setup of a lifetime.


32) What do you expect in 2012?
A dang good chase season. I have a lot more freedom this season than I’ve had in the past and I’m hoping that I can get several tornadoes out of my first trip to the Great Plains this upcoming May. I’m hoping late May/early June light up like a Christmas tree! 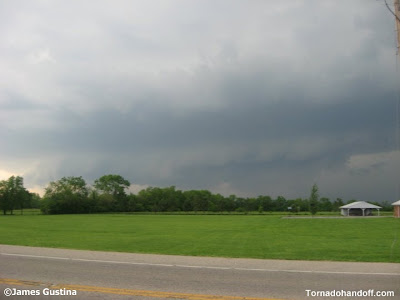 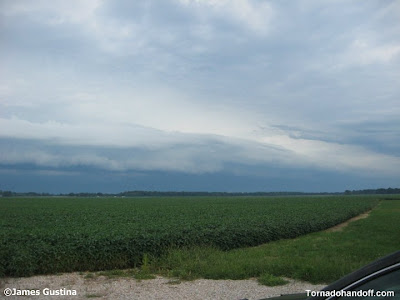 30) Do you only chase severe weather or do you chase hurricanes and winter weather as well?

31) Do you go to a college or university, if so, what do you major in?
I went to Rock Valley college and have a degree in Earth Science.
I also went to the University of IL. and got a my Law Enforcement Certification there for RPD.

32) What do you expect in 2012?
Well provided I can get to chase on some good days working around my work schedule, I hope much with great photos and accounts.

I love to storm chase which has always been in the N.IL or S. WI.  It is to experience the power and glory and capture it in photos the best I can .
Composed by: Melky's Used Syringe at 00:06 1 comment: 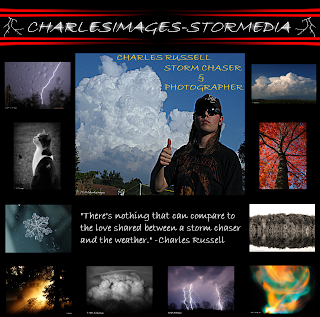 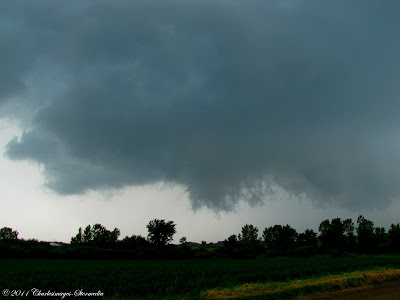 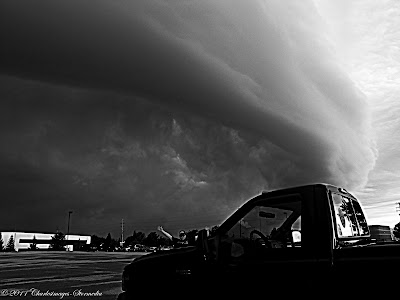 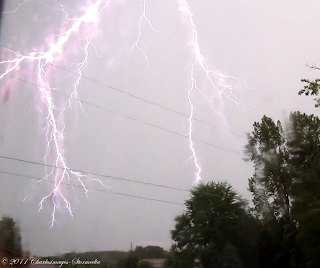 I’m a Storm Chaser. Not many people can legitimately say that, considering the population of the world exceeds 6 billion. I am proud to be a storm chaser, and as a storm chaser, it is my duty to spot, report, inform, collect data, record media, and use it all to educate others, provide entertainment, and hopefully, save lives and property in the process.
Composed by: Melky's Used Syringe at 23:44 No comments:

Why do you come to this blog?